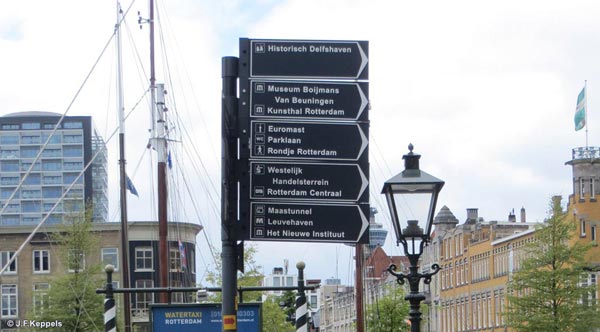 How to get from Rotterdam City Centre to ....

Difficult to miss, it's an easy walk from the Central Station or Cruise Terminal just in the heart of rotterdam city centre. If your not close enough to the centre to walk you can take tram line 2,8,20,21,23,24,25 or any metro to Beurs station.

The Market Hall is located in the city centre of Rotterdam, near Blaak Station, the Cube Houses and about 600 Meters walking from the Koopgoot.
Tram 21 and 24 - Metro E, B, or C.


Metro line A or B to Delfshaven Station (direction Vlaardingen West). Walk back on the Schiedamseweg for about 200 meters and take a right bij the channel (Aelbrechtskolk). 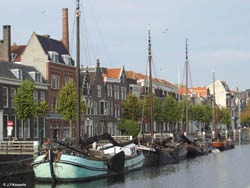 It's a short walk from the Erasmus Bridge or take a water taxi to the Parkkade (jetty 61). The Park is right there and the Museum Park is just a short walk, following the Westerlaan, Kievitslaan and cross the Westzeedijk.


Tram line 8 and 18 stop Kievitslaan, which is between The Park and the Museum Park.

Euromast Tower and The Park

The easy way is the water taxi or take a nice walk of 25 minutes following the waterfront from the Erasmus Bridge / Spido. On your way you pass the Veerhaven and The Park.

Tram line 7 (direction Woudenstein) or metro line A, B or C to Voorschoterlaan. From there it's about 15 minutes walking north to Lake Kralingen (Kralingse Plas) and the 2 Windmills on the Plaszoom.


Take bus 38 (direction Kerkhoflaan) to the end stop Kerkhoflaan. From there it's a 15 Minutes walk to the little beach at Lake Kralingen.

Take a map or navigation with you so you know how to walk the last part to the lake. 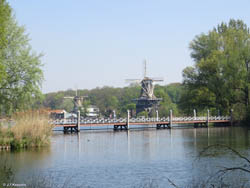 The Spido is located under the North side of the Erasmus Bridge. Take tram line 7 to Willemsplein or take metro line D or E to Leuvehaven (direction De Akkers or Slinge).

The old entrance of Rotterdam Zoo (Diergaarde Blijdorp) is 14 minutes walk from the Central Station. You can still access Blijdorp Zoo there. Go to the back side of the Central Station (there's a walk and bicycle tunnel to the left side of the station) and go left. Follow the Stationsingel. By the next big road (third street) take another left, cross the road to the Bentincklaan and walk straight to the entrance (Adress: Van Aerssenlaan 49, Rotterdam).

With the car, you go to the parking at Blijdorplaan 8 (Blijdorp P1) with the main entrance. 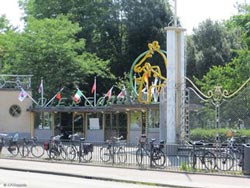 Walk from the Cityhall to the Hofplein (with the fountain). There are a few stairs close by to enter the Lucht Singel. One by the Shell gas station and another across the orange artwork Nieuw Delfse Poort.

Take the water taxi! You can also walk 30 minutes from the cruise terminal, cross the bridge by the Holland-America-Line building (Hotel New York) and turn to the right (around the old warehouse) en just follow the waterfront. If you're comming from the Central Station take metro line E (direction Slinge) to Rijnhaven en there bus 77. Travel time 35 minutes. 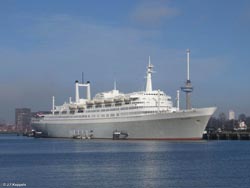 This miniature world is just a few minutes walk from the Central Station. If you're on the station square with the station in the back, follow the road (Weena) right of the station square, cross one street and it's on the corner just after the green building (Albeda College).

From the Central Station take metro line D or E to Wilhelminaplein Station (direction De Akkers or Slinge). With the metro it's just 7 Minutes. The cruise terminal is close to the metro station. Walk to the left comming out of the station. Hotels close by are Nhow Rotterdam, Hotel New York and Room Mate Bruno.


For a better view take tram line 23 or 25 (direction Beverwaard or Carnisselande) to Wilhelminaplein, just over the Erasmus Bridge. From the tram stop walk in the direction of the red Luxor building but keep to the right passing the metro station. Travel time 16 minutes. 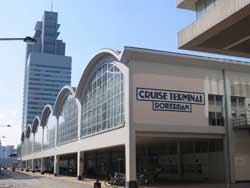 The Asian part of Rotterdam can be found close to the Central Station at the West-Kruiskade. 3 minutes walk straight from the front of the station.

Museum and Depot Boijmans Van Beuningen are in walking distance from the centre of Rotterdam or Central Station. Walking time around 20 minutes. There are plenty of direction signs that point you in the right direction. It's by the Museum Park (Museumpark 18-20) and close to the Erasmus Medical Center (Erasmus MC). 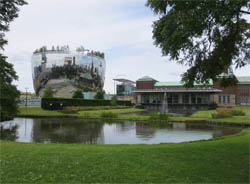 10 Minutes from Rotterdam centre with metro line D or E. Go to Zuidplein Station (direction De Akker or Slinge). The metro station is at the Zuidplein Mall. From there it's 5 minutes walk to the Ahoy event centre. Just follow the signs Ahoy. You go outside, down the stairs and cross the road.

The water taxi has jetties by the waterfront with a yellow sign. On the sign a jetty number and phone number. When you're there give them a call and they will pick you up. 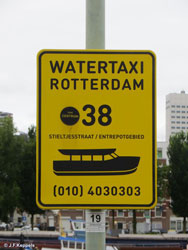 The Waterbus has a stop at Willemsplein by the Erasmus Bridge. You find the jetty for the Waterbus right next to the Spido.

Tram line 4 (direction Molenlaan) to stop Lommerrijk. Walk a few steps further and turn right to the Prins Bernhardkade, at the end take a left into the park. Travel time 25 minutes.

Take bus 33 from central station to the Airport or take metro line E to Meijersplein Station and then take bus 33 from there. Travel time 30 minutes.

From the Airport take bus 33 to Meijersplein Station (3rd stop) and then metro line E to Central Station.
or
(Beurs Station for Shopping Centre and Tourist Office) (Wilhelminaplein Station for the Cruise Terminal). 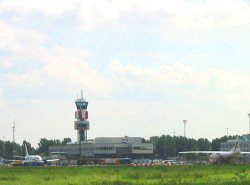 Take te train from Rotterdam Central Station to Schiphol Airport (direction Amsterdam). The train takes a little hour to Schiphol and the train station is there right under the airport.

With an extra payment you can take the IC Direct and cut the travel time to 25 minutes. See also the video going from Schiphol to Rotterdam.